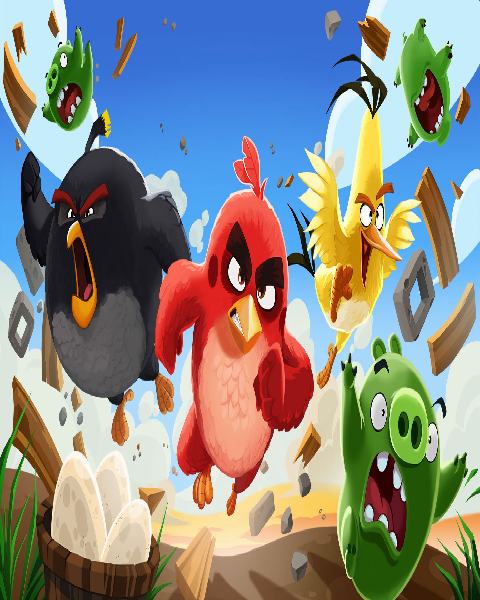 Angry Birds is an alluring animated adventure game that went on to become a blockbuster movie. The movie was successful in terms of drifting the focus from the game mode. The central plot of the movie is an expanded version of the game, however, it is told with a difference. The movie picturizes a bird island inhabited by terrestrial birds, who consider themselves as the only inhabitants of the island. Among the bird clan, the Redbird known for its short temper, Chuck is known for its swift movement and Bomb known for its short fuse remain the primary characters.

One day the bird clan on seeing green pigs continues to realize that they are not the only inhabitants. The Redbird begins to doubt the intention of pigs and recruits Chuck and Bomb to look out for their island protector. It is indeed interesting and captivating to look at the real life bird clan characters’ transformed from the lifeless characters of the video games. In the next part of the movie, the birds start looking for their eggs. And from then on the extension of the video game mode begins. The movie has definitely set a high standard for themselves and others.

The Angry Birds movie has a good sense of humor incorporated into it. The three important characters, the Red, Bomb and Chuck have been etched well. Their character sketch is indeed pertinent that they can be ideally utilized for further sequels. The animation quality seems way beyond perfection. It is indeed spectacular to watch the tiny video game illustrations to get into life to hop, chirp and act. It is a tough challenge which is well executed. The voice casting of the film stands unique and perfect. Looking into the animation and voice casting aspects, the movie lingers in our minds as a majestic icon.